At the time, I was truly worried I might have lost it.

I had just finished an early dinner before heading to K1 for the monthly league race, and I could feel my stomach squirming as I walked to my car. My first thought was rapid-onset food poisoning, but the feeling in my gut didn't match the other times I'd encountered food poisoning - plus I had another strong reason to be worried.

My year up to then was marked by disappointment and mediocrity, and I was struggling to match the pace of my throwaway laps the year prior - this time was still the sixth-fastest of the year, but the fact that as of August my best lap of the year was a 22.6 was incredibly depressing. Just to add a rotten cherry on top of this shit sundae, I could only manage a 23.1 second lap during August league qualifying, relegating me from the fastest race and essentially the battle for second in the championship. I knew the karts had been awful since the middle of last year, but I didn't believe the general garbageness of the karts explained my fall from my personal-best 22.4 last January to 23.1 last month. I was starting to believe my competitors had levelled up in skill and I had no response - so I suppose it made sense I was a bit uneasy on my way to see if the prior month was a terrible fluke or a worse omen.

If I was feeling uneasy before I made it to K1, I was practically queasy when I arrived. Normally I check the standings for the best times of the day when I arrive to get a sense of the karts and how my competition is doing that day - if the best time is barely under 23.0 I know to expect a night on the struggle bus. That night was not one of those nights - when I check the timing board I see the screen full of mid-low 22-second times; my 22.6 had been unceremoniously booted from the fastest times list. One competitor I knew who was on the slower side but had been improving posted a 22.5 - this did not look good for me, but I was still 20 points ahead of fourth so I might manage to stay on the podium by the end of the year. I'd heard there were a couple ringer karts in the pool and tried to get them removed for league, only to be told there were even more floating around for other competitiors to potentially use to knock me out of the fast race again.

I normally get to K1 too late to get in a warmup session before league starts, but since I managed to get out of the house early I decided to join the fun run for league racers right before qualifiers began. The kart I drove didn't feel any particularly different - maybe a bit nicer to drive - but checking my timesheet after the session ended showed my fastest lap was a 22.5, my fastest of the year so far. Thinking perhaps the prior month actually was a fluke, I was slightly relieved heading into qualifying.

With 15 competitors I began qualifying with the goal to be one of the fastest eight. My first kart felt okay - nothing to write home about, but it had the slightly heavier steering I prefer and it didn't seem to suffer from the expected public kart issues. I typically don't get a good look at my times while I'm on track, but I can see my relative position in the session and after about half distance I saw I was in first - since I didn't feel like I was struggling to set my time I figured it was at least decent enough to guarantee me entry into the fast race, maybe a 22.6 or so. After the session finished I looked at the board to see my actual time - and I couldn't believe it. Somehow I managed to run a 22.167, shattering my previous personal best by almost a quarter second - that's definitely good enough to start pole for the final and even if I get bumped I am pumped regardless. Looks like I might not have lost my mojo after all.

Going into my second qualifying session my goal is to goof off and have fun - I just ran my personal best and given the objectively fastest racer isn't running tonight I don't think anyone's going to match it. Settling into my kart it feels about as average as my last one, but I tell myself I'll have to wait until I get moving to tell if there's any magic in it. I pulled the short straw and was the first driver on track for my session, and when I made it to pit exit one of the workers asked if I was going to run a 22.0. "We'll see," I said, fully internally acknowledging the last session was a fluke. With nobody ahead of me I figured I better make the best of this, scrubbed some heat into my tires and set off.

While this kart also doesn't seem to have the issues I've had to drive around many times before, I also notice it feels a bit more powerful than average - a double-edged sword, as it means it'll likely run out of power later in the session so I need to set my hot lap sooner before the tires are fully up to temp. Noting this, I attack hard on my second lap - it felt good, but the tires weren't warm yet so I think my next hot lap will be better. I set up for it and for whatever reason - I probably messed up the first hairpin - I decide to throw it away and try again next lap.

I wish I had recorded it so I could recall exactly how everything managed to come together, but I remember getting through the hairpin and double-apex at the start of the lap without much drama and thinking to myself this feels like a good lap. After that, everything was kind of a blur but I remember managing to take the final hairpin without hopping like I would in practically every other kart I drove this year and when I crossed the line I see I'd managed to bump Anthony out of first. My next time down the front straight I get a thumbs up so I decide to take a glance at my time before I start my next hot lap.

At this point I suppose I should provide some context - there's a hierarchy to times at K1: a 23-second lap is fast for anyone who doesn't go karting often; a mid-high 22-second lap is where I expect people who go karting elsewhere would run here for their first sessions and it's the bare minimum to be competitive in league races; a low-mid 22-second lap is almost guaranteed to be the fastest of any non-league session and a top-three league qualifying time, a testament to someone's skill and effort.

Taking into account all the excuses - I had a fast kart, I didn't have to deal with traffic - a 21-second lap is still basically warp-speed. I can count all the people I have seen run a 21-second lap on one hand, and adding in people I think have and could do it with the right conditions I still only need two hands. Looks like I definitely haven't lost my mojo after all. I tried to run another 21.9 that session, but my heart wasn't in it - I had pole by a quarter second and had beaten my personal best by almost half a second, what was left to prove?

Unfortunately my kart understeered in the final causing me to finish in third place, but proving to myself that I am currently third-overall in the championship this year due to skill and not just because I've made it to every round was the best early birthday present I could to give to myself. 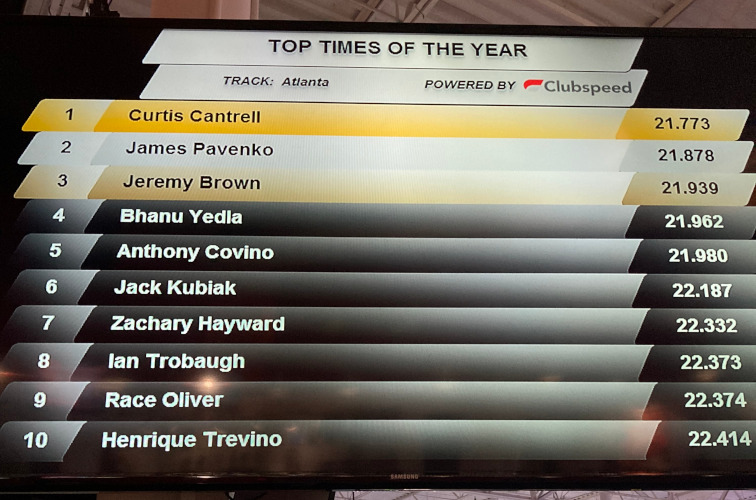