I've never liked guns that much, but I do remember having an enjoyable time shooting rifles and shotguns while I was at Boy Scouts camp. Despite not having any real desire to own a gun, I found myself applying for a weapons carry license on my 21st birthday really just because. The events of the ensuing decade help me understand my issues with guns are actually issues with gun people, and those issues were well-founded [1].

Now it's 2022, I'm renewing my license for the second time and I still don't have or particularly want a gun - mostly because I knew carrying a gun with zero training was an idiotic move but getting firearms training would expose me to an unsafe level of Dixie flags in one building. But I knew I needed some way to defend myself against law enforcement, and in a serendipitous moment of Googling I discovered a gun range in west Midtown [2]. I couldn't believe such a business existed in a bastion of rich white liberalism, so I decided to swing by the next time I was in the area. Three days later, it just so happened I was in the area so swing by I did.

The first thing that struck me on entering was how black it was [3]. As someone who doesn't frequent many gun ranges, finding one with a majority-black staff felt like viewing an opera with a majority-black cast. After grabbing my jaw off the floor I signed up for their new shooter package which includes everything I needed to get on the range except ammo.

My goal at this point was to simply get comfortable handling a firearm - I knew I wouldn't start off plinking targets at 50 yards, I just wanted to confirm that merely holding a gun wouldn't turn me into Second Amendment Man or make me look for a gunfight to join [4]. Since I didn't really know what I was doing I jumped around between guns and target distances, so my first target was a mess and I didn't take a picture of it. On my last gun of the session, I got a new target and calmed my nerves enough for good breath control and I think the results speak for themselves:

I chalk most of this up to a heavier gun that soaked up more recoil, but I think this isn't too shabby for someone who hadn't held a gun in at least two decades. One of the staff members at the range complemented my target afterwards, so I must have been doing something right. I left with half a box of ammo left over and didn't want to keep it at home, so I decided I'd go back to finish it off.

Upon my return I kept jumping between guns to figure out what works the best for me; I don't think I did as well as a few days prior but I think I still did OK: 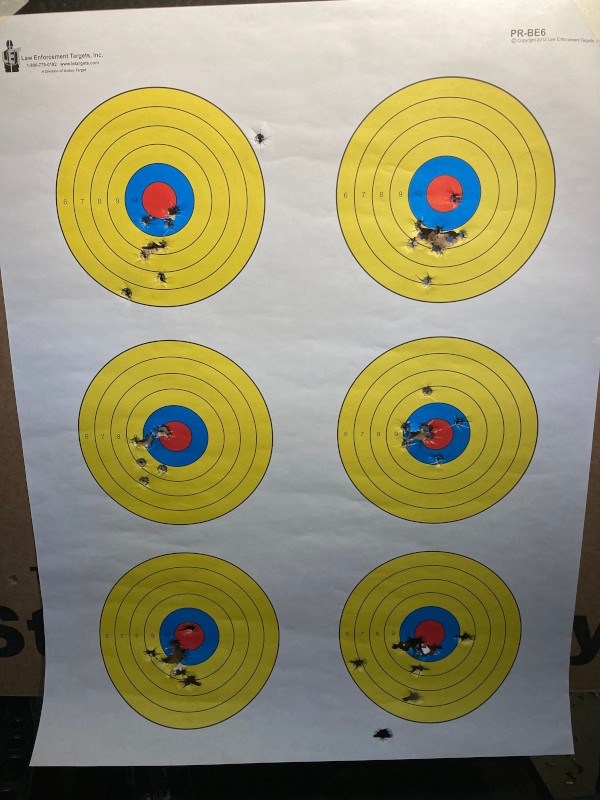 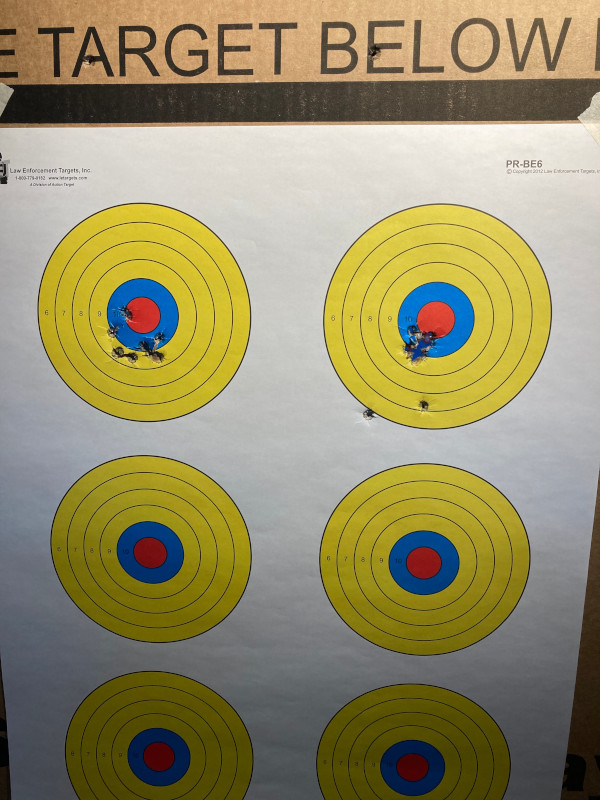 I'm still not a huge fan of guns but at least I met my goal by feeling confident in handling a firearm without having a nervous breakdown or turning into an action movie hero. That said, I think I need to become a much better shot before I consider owning one; I might take the range up on their 2-for-1 training offer.